Skip to content
The Volvo P1800 resto-mod by Cyan Racing is traveling from Sweden to attend The Quail, a Motorsports Gathering

Following its 2020 launch to rave reviews in Europe, the Volvo P1800 Cyan will make its official North American debut this summer at The Quail, a Motorsports Gathering on August 9. Prior to that, Cyan Racing will introduce its exquisite resto-mod to the Los Angeles media and public at a number of special events. 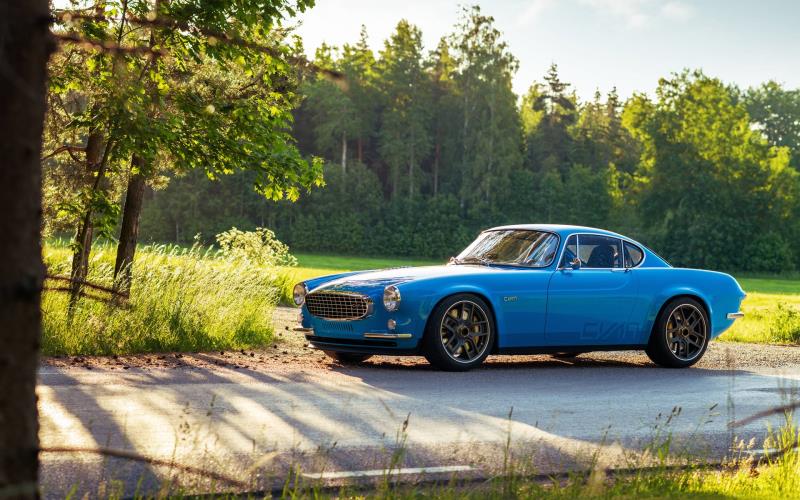 Without doubt, the Volvo P1800 Cyan is an extraordinary interpretation of the original 1960s Swedish/Italian-designed Volvo coupe. Built by the five-time and reigning World Touring Car Champions, Cyan Racing, the car combines the best motorsports technology with classic styling.

The Swedish engineers have decided to create a production version from the original prototype and its debut at The Quail will allow driving enthusiasts an opportunity to purchase their own Volvo P1800 Cyan. 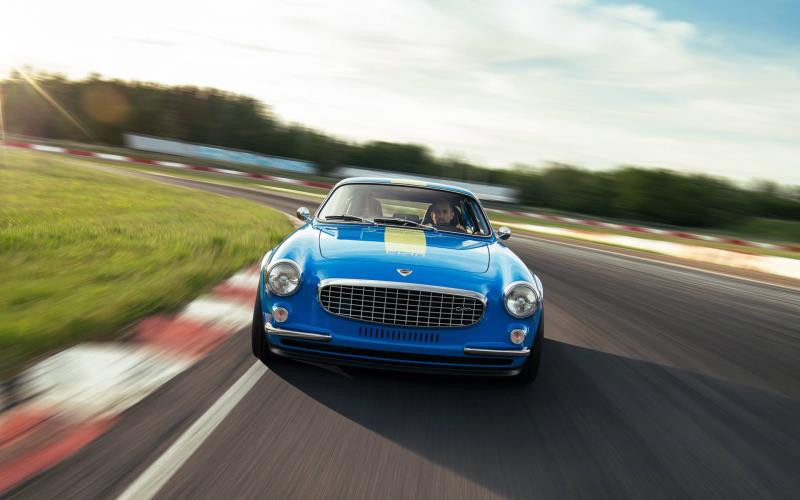 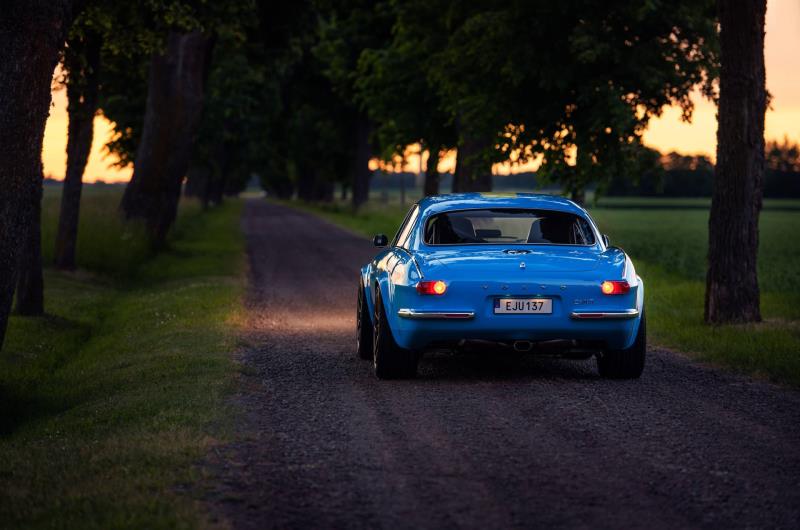 WHO IS CYAN RACING? 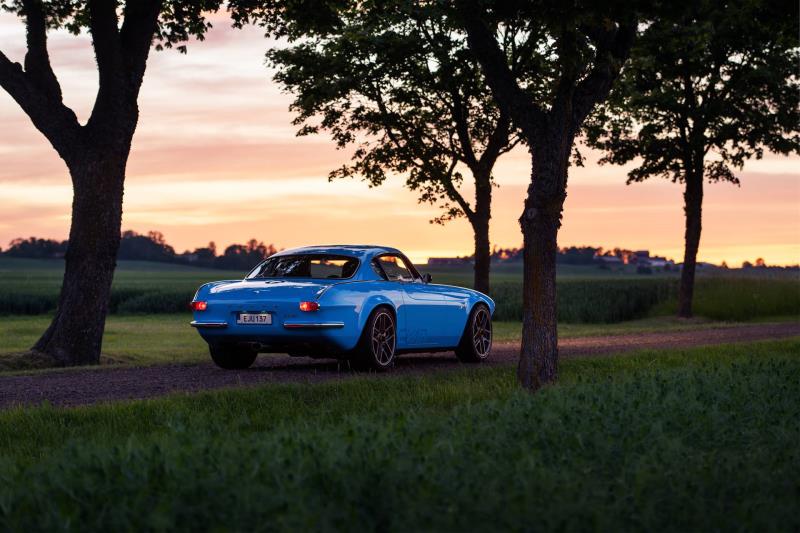 Cyan Racing may be unfamiliar to North American enthusiasts, but most people will instantly recognize Polestar; the company’s former identity. Having started life in Sweden as a racing team, it was soon running the Volvo works team and achieved international success. Simultaneously, the company transferred its engineering knowledge to production cars, creating aftermarket accessories and engineering the Volvo C30 Polestar Concept Prototype, which became their first road car project. Following a number of concepts, the Volvo S60 and V60 Polestar became available from dealerships around the world in 2014. The brand’s success led to its acquisition by Volvo in 2015.

With a focus on sustainable performance, Polestar changed direction in the hands of Volvo to spearhead EV development, while the racing engineers were liberated to do what they know best. Cyan Racing is once again a fully independent organization, continuing to dominate the world touring car scene on race tracks around the world, returning to the 2022 WTCR World Touring Car Cup as the five-time and reigning champions. 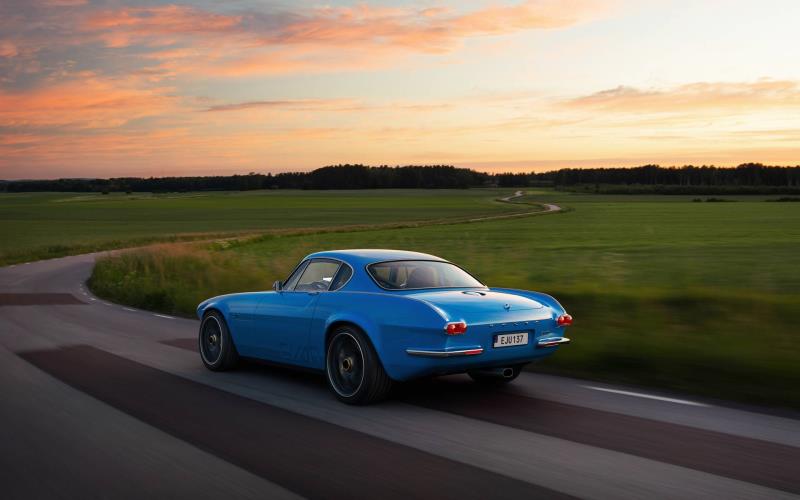 ‘Our company was founded in 1996 to race Volvos in Sweden and the Volvo P1800 Cyan is closing the circle for us,’ said Christian Dahl, CEO and founder of Cyan Racing. ‘After winning many national racing championships, we claimed our first World title with Volvo in 2017 and have since won four further world titles with two more manufacturers. The first Volvo P1800 Cyan carries our blue racing color to mark our heritage.’

The engineering team at Cyan Racing has more than two decades invested in race and road car development. It’s been involved in every aspect from design to aerodynamics, engine, chassis and electronics. ‘Development of the Volvo P1800 Cyan was possible because of our advanced engineering process, which incorporated the same talents needed to design, build and develop our world title-winning Volvo S60 TC1 Cyan and other race and road cars,’ said Dahl.

The earlier C30 Concept played a key role in the P1800 development. ‘A vital part of the project was to reconnect with our first road car,’ said Mattias Evensson, Project Manager and Head of Engineering at Cyan Racing. ‘We wanted to inject some of the acclaimed driving feeling and performance from the C30, and it was thoroughly useful throughout the development process.’ 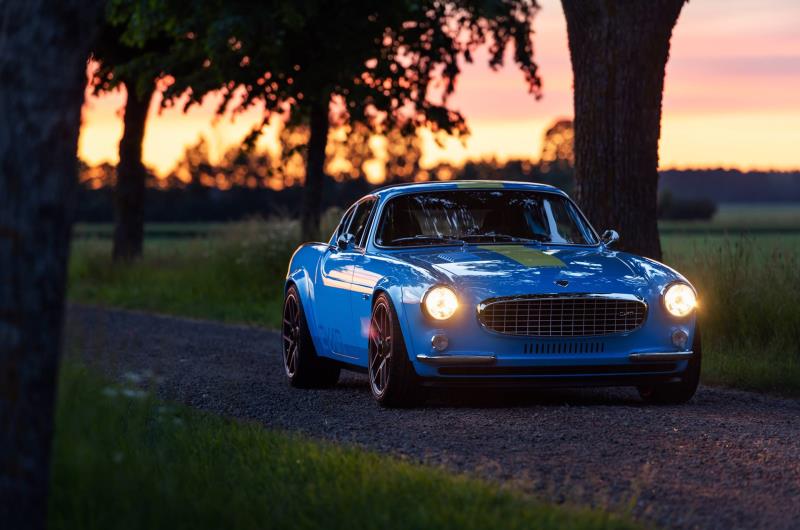 The original Volvo P1800 was unveiled in 1960, a year before the Jaguar E-Type, two years ahead of the Ferrari 250 GTO, and three years prior to the Porsche 911. ‘The Jaguar, Ferrari and Porsche were all continuation cars,’ said Dahl. ‘That left us with inspiration to create what could have been if our race team had been around in the ’60s, racing the P1800. And what would happen if we’d been able to design a road version of that race car, as we did with the Polestar Volvo C30 and S60. The Volvo P1800 Cyan is our interpretation of what could have transpired if all these elements came together.’ 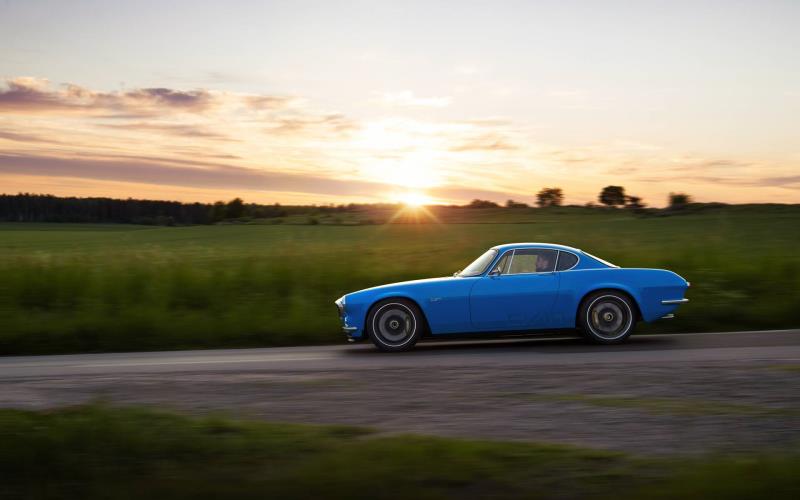 With so much technology at its fingertips, the team looked at its powertrain options. ‘We could have built an electric Volvo P1800 filled with all the latest technology, comfort and luxury. But that wasn’t what we wanted,’ Dahl continued. ‘We desired something more visceral, capturing the spirit of the ’60s with the technology of today.’

Having dominated Touring Car competition, the design team decided the two-liter turbocharged four-cylinder engine based on its title-winning Volvo S60 TC1 race car would endow the project with plenty of character. Producing 420hp and 336 lb-ft of torque, the engine has a 7700rpm redline. 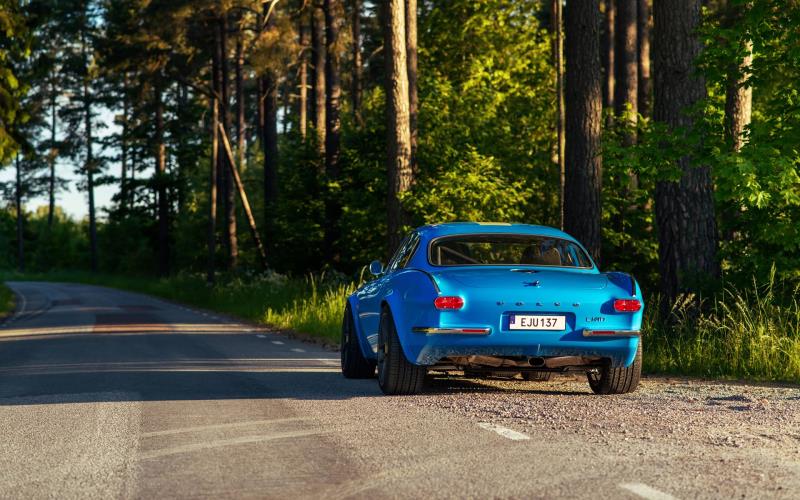 ‘While evaluating engines for the Volvo P1800 Cyan, we considered a wide range of Volvo options, including the original B18, the ‘Red Block’ B230, the five-cylinder ‘White Block’, the short inline-6, the V8 built for the Australian Supercar Championship, and the four-cylinder VEA that powers the latest cars,’ said Evensson.

‘The efficient and lightweight VEA (Volvo Engine Architecture) was chosen because it gave us the best opportunity to transfer experience from our race and performance cars of the past decade. It was also ideal for the project in terms of compactness and weight,’ he continued. 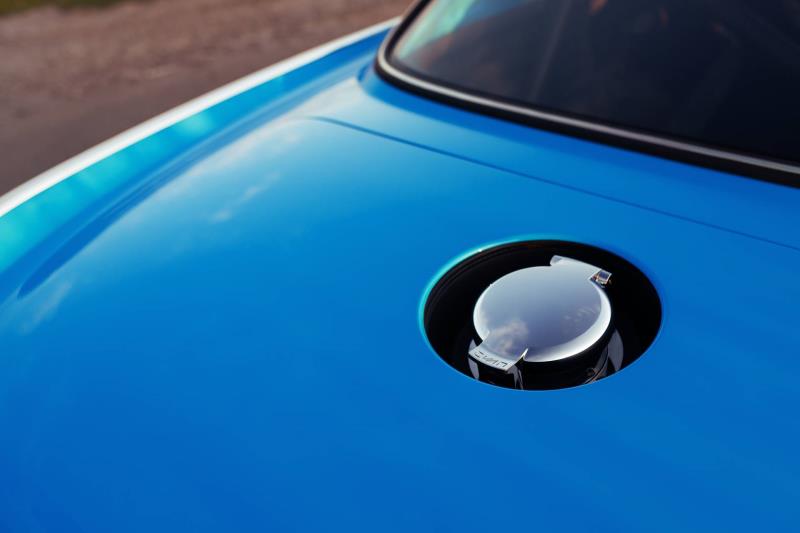 The engine made its debut in the 2011 Volvo C30 WTCC race car and was a key part in winning the 2017 Championship. ‘It’s an engine that provided us with a strong mechanical base and a very efficient combustion system. We adapted it to suit the Volvo P1800 Cyan, increasing power throughout the entire rev range,’ said Evensson.

In fact, thanks to extensive experience, the engine was tuned to deliver a linear power curve, mimicking a normally aspirated engine and replicating the ’60s driving experience but with significantly increased performance and responsiveness.

‘The power peaks late. It was designed for high revs, with the torque intuitively linear to throttle pedal input. We learnt from racing that drivers want precise control of the torque.’ 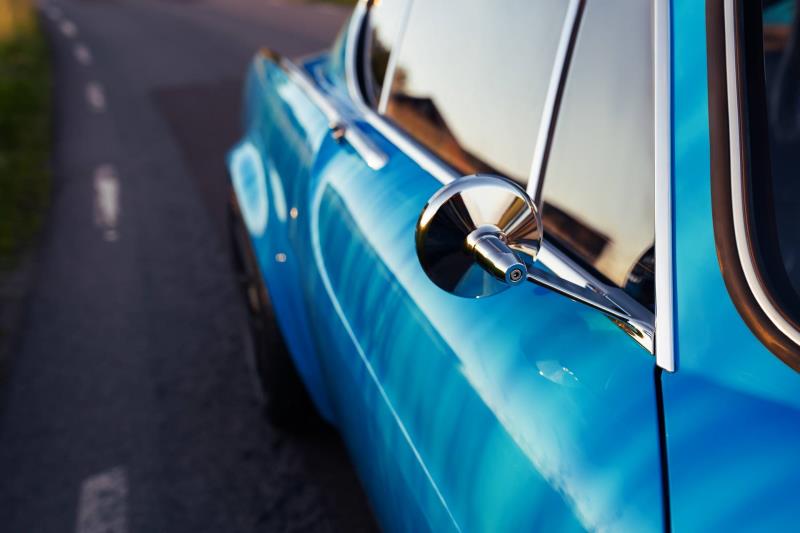 A bespoke five-speed Holinger manual transmission with a dog-leg first gear was installed to again echo the mechanical feeling of the original Volvo P1800, but with a crisp gear change and the ability to handle the torque.

The original P1800’s live rear axle was replaced with Cyan-designed independent rear suspension and a torque-biasing limited-slip differential. Mounted in a Holinger housing, the diff was geared to combine capable performance on the circuit with civilized behavior on the road. 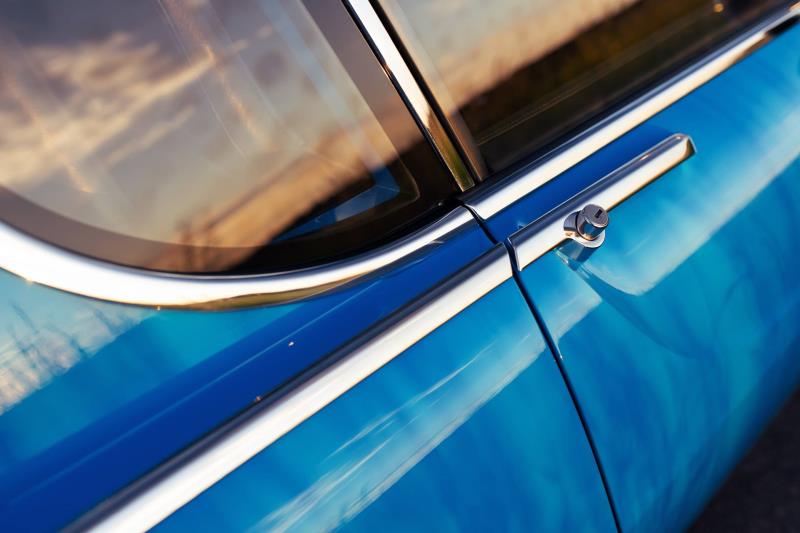 Having decided to give the project a retro feel, the engineering team didn’t want to overwhelm the driving experience with electronic aids. ‘We decided to apply our expertise in engine, chassis and aero design to create a car that delivers on the Cyan philosophy in terms of predictability and intuitive driver control. We wanted an analogue driving experience that would be true to the ’60s, but at a significantly higher level,’ Evensson explained.

As a result, nothing distorts the experience; the car has no stability control, ABS or brake booster. ‘The Volvo P1800 Cyan is all about the direct connection between the driver, tires and road,’ Evensson continued. 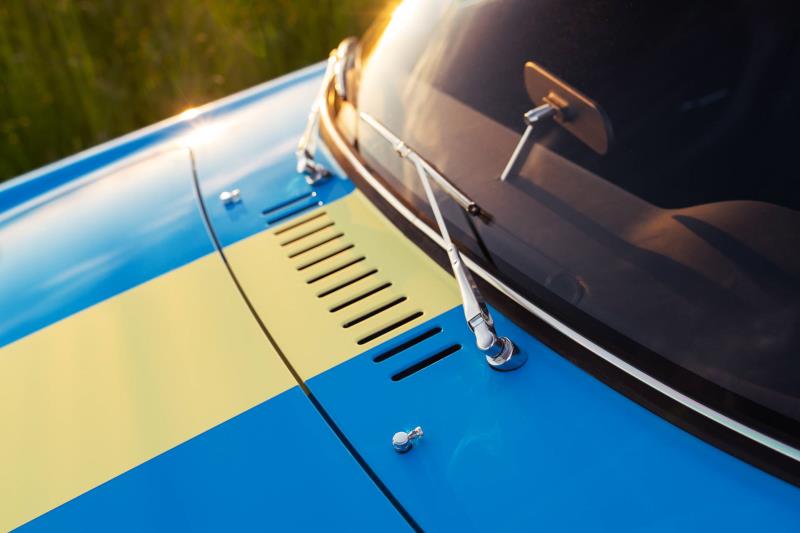 When approaching a vehicle that’s more than 50 years old, a number of measures were deemed essential by the Cyan engineers. Alterations to accommodate a wider track and larger wheels, strengthening the body to reduce flex, and a repositioned greenhouse were top of the long list of design considerations. 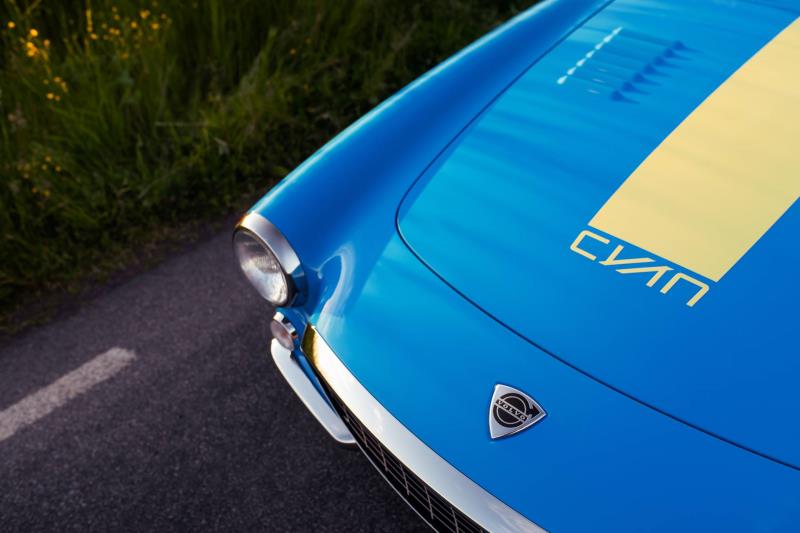 ‘The basis for a precise driving experience is a solid body structure. Cars from the ’60s always have weak points and low quality steel that allows flexing,’ said Evensson. ‘Using experience learned on the race track, we redesigned the original structure and strengthened weak points in the chassis through triangulation using high-strength steel. We also integrated the carbon fiber body with the chassis structure – It’s not simply separate pieces, the body panels became structural components joined to the steel with high-strength adhesive. This allowed the carbon fiber to greatly reinforce the structural rigidity.’

Although the Volvo P1800 Cyan is significantly more rigid than the original 1964 P1800 donor vehicle, the process of refinement and reinforcement also added lightness. The car tips the scales at just 2180 lb (990kg), which contributes enormously to the driving fun.

The result wasn’t simply an engineering study. A number of measures were taken to enhance the beauty of the original Swedish/Italian design. One of the key factors was enlarging the wheel housings to accommodate the 18×8.5′ front and 18×9.5′ rear forged wheels. 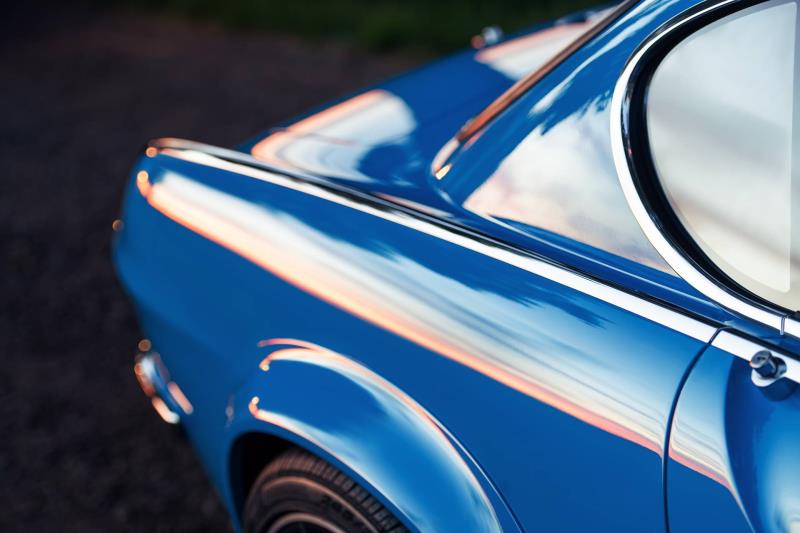 Perhaps less obvious was the repositioned glasshouse, which saw the cabin moved slightly rearwards. It resulted in a slightly longer hood and front fenders, creating a subtly more sporting silhouette.

‘I think we succeeded in merging the new design and technology without losing the character of the original Volvo P1800,’ said Ola Granlund, Head of Design at Cyan Racing. 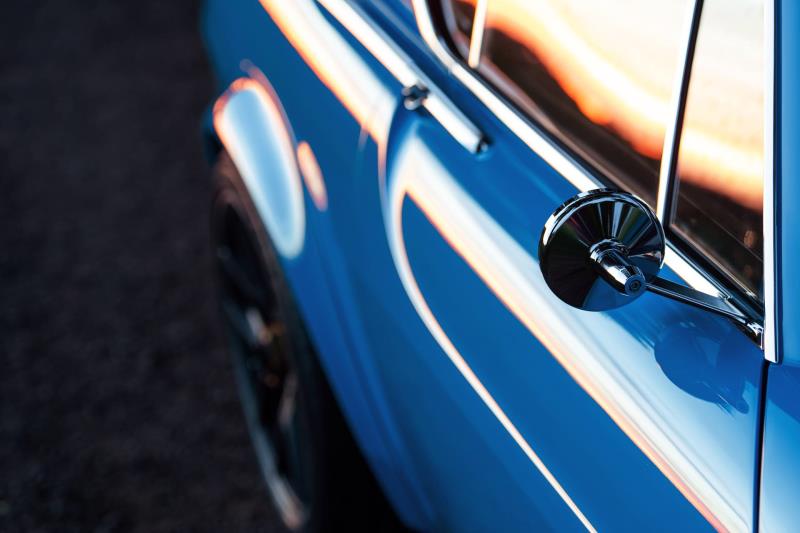 When listing the modifications, it’s almost easier to outline what remains original on the Volvo P1800 Cyan. It’s limited to steel from the original chassis, the hood release mechanism, handbrake and windshield wipers. Everything else is bespoke, including all the exterior chrome trim, bumpers, etc. The exquisite mirrors, door handles and lights are machined from billet aluminum. Even the glass is new, a very expensive but necessary upgrade to the Swedish resto-mod.

And, of course, the Volvo P1800 Cyan was finished in the company’s signature cyan paint, instantly recognizable from its Polestar predecessors and a nod to the company’s racing heritage. Future production models will be available in any color, with a stunning vehicle in a totally different color and interior promised for The Quail debut. 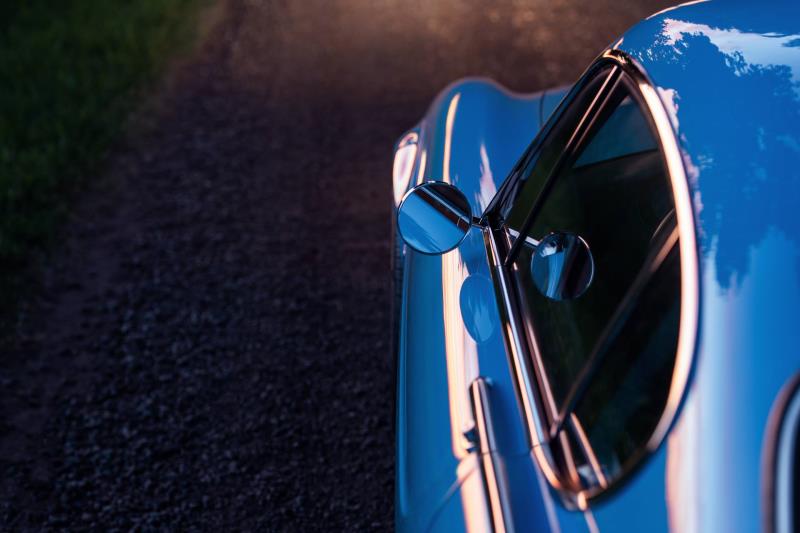 ‘We’re really pleased with the level of grip and responsive steering we achieved,’ said Thed Björk, development driver and 2017 World Touring Car Champion with Cyan Racing. ‘The car goes exactly where you point it. You can be brutal going into a corner and still find your apex within millimeters. However, the set up isn’t aimed at the ultimate lap time, instead we focused on delivering an enjoyable and exciting driving experience.’ 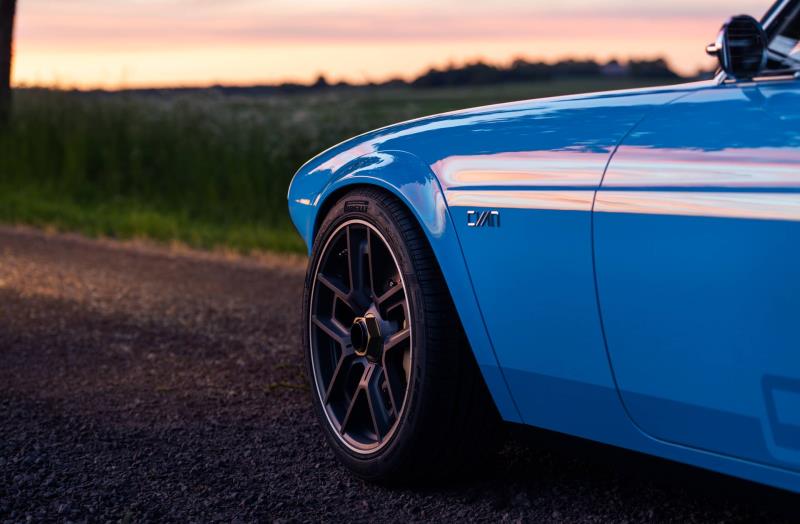 The driver is connected to the road by 235/40 front and 265/35 R18 rear Pirelli P Zero tires mounted on 18′ forged, centerlock wheels. The braking system utilizes four-piston calipers at both ends, with 362x32mm steel rotors up front, and a genuine pedal feel thanks to the elimination of both a brake booster and ABS that can otherwise interfere with the operation.

Every Volvo P1800 Cyan is hand-built in the Cyan Racing Gothenburg headquarters. Each is based on a genuine P1800 donor chassis. Prospective clients should please contact Hans Bååth, GM, Cars at Cyan ([email protected]), for pricing and individual specification. 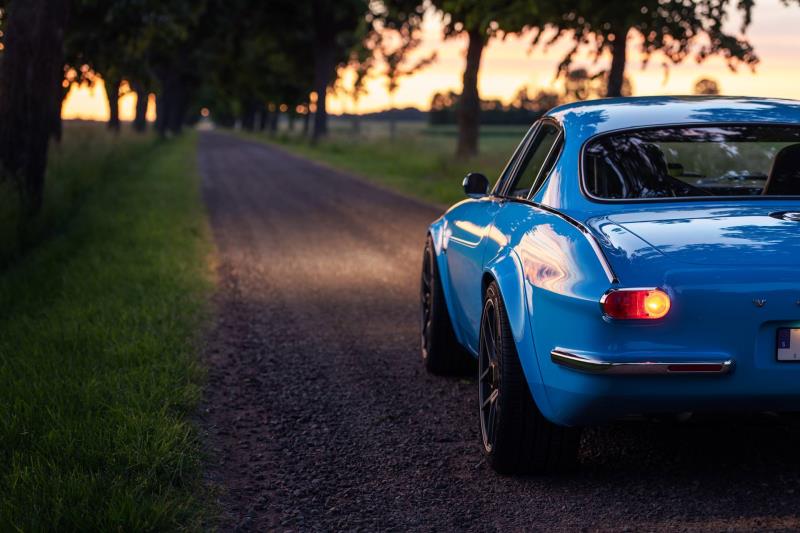 Each Volvo P1800 Cyan is built to the client’s exact specifications. The car’s design allows it to be tailored into anything from a lightweight, high-performance cafe racer to a grand tourer, which can be enjoyed on winding roads on a summer morning.

‘A Volvo P1800 Cyan is not a car you buy for practical reasons. It was created to fulfill the desire to own and drive a totally unique and personal car. The opportunities for personalization and customization are plentiful, and all with the aim of total customer satisfaction,’ said Bååth.

Glass: all glass is bespoke for the vehicle’s updated design

What are the best used luxury cars to purchase?